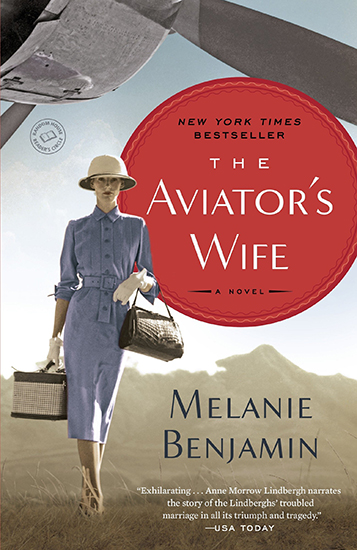 For much of her life, Anne Morrow, the shy daughter of the U.S. ambassador to Mexico, has stood in the shadows of those around her, including her millionaire father and vibrant older sister, who often steals the spotlight. Then Anne, a college senior with hidden literary aspirations, travels to Mexico City to spend Christmas with her family. There she meets Colonel Charles Lindbergh, fresh off his celebrated 1927 solo flight across the Atlantic. Enthralled by Charles’s assurance and fame, Anne is certain the celebrated aviator has scarcely noticed her. But she is wrong.

Charles sees in Anne a kindred spirit, a fellow adventurer, and her world will be changed forever. The two marry in a headline-making wedding. Hounded by adoring crowds and hunted by an insatiable press, Charles shields himself and his new bride from prying eyes, leaving Anne to feel her life falling back into the shadows. In the years that follow, despite her own major achievements—she becomes the first licensed female glider pilot in the United States—Anne is viewed merely as the aviator’s wife. The fairy-tale life she once longed for will bring heartbreak and hardships, ultimately pushing her to reconcile her need for love and her desire for independence, and to embrace, at last, life’s infinite possibilities for change and happiness.

Drawing on the rich history of the twentieth century—from the late twenties to the mid-sixties—and featuring cameos from such notable characters as Joseph Kennedy and Amelia Earhart, The Aviator’s Wife is a vividly imagined novel of a complicated marriage—revealing both its dizzying highs and its devastating lows. With stunning power and grace, Melanie Benjamin provides new insight into what made this remarkable relationship endure.

“Talented historical novelist Benjamin has a knack for picking intriguing, if somewhat obscure, women in history and making them utterly unforgettable…Intimately depicting [Anne and Charles Lindbergh’s] marriage of duty and partnership in the air, as well as the horrific kidnapping and murder of first child Charles Jr., this is less love story than voyeuristic glimpse at one of the 20th century’s most captivating men through the eyes of the woman who knew him best. In true Benjamin style, it’s Anne who captures us all in this exquisite fictional take on an iconic marriage.”
—Publishers Weekly, Starred Review

“Benjamin delivers another stellar historical novel based on the experiences of an extraordinary woman… Fictional biography at its finest.”
—Booklist, Starred Review

“A thoughtful examination of the forces which shaped the author of Gift from the Sea.”
—Kirkus Reviews

“What Mrs. Lindbergh was ready for will fascinate history buffs and surprise those who know of her only as ‘the aviator’s wife.”
—People Magazine

“…riveting…the reader’s heart breaks with Anne’s as she copes with the infamous kidnapping and death of her firstborn, baby Charlie—and her husband’s coldness.”
—USA Today

“Benjamin’s primary focus is on Anne’s evolution from submissive helpmate into the author of the feminist classic Gift from the Sea…Well-researched and paced, this novel will certainly spark readers’ interest in learning more about this famous couple.”
—Library Journal