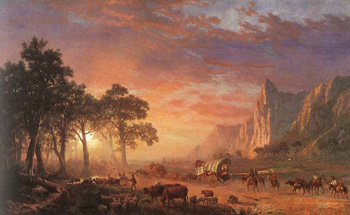 The issue of polygamy, specifically as outlined by the Mormon faith, was nearly as big an issue as slavery was in antebellum America. Brigham Young, the Mormon leader, was a figure of much interest as well as controversy; Vinnie met him on her tour west, and made no attempt to hide her disgust at the practice of polygamy and the paternalistic society of the Mormons in Utah. For more information, this is a rich, balanced site (The Library of Congress; American Memory).

1858
Vinnie begins her career on the Mississippi; the first transatlantic telegraph received in New York City. 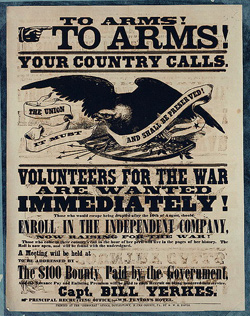 This year, 2011, marks the 150th anniversary of the beginning of the Civil War, the defining moment that shaped the identity of America forever. Vinnie's public life was played out against this great, epic backdrop; she was in Mississippi on the very eve of secession, saw at least two brothers go off to war, visited the troops outside of Washington when she and Charles were visiting on their honeymoon tour. Soon after the war was over, she was in the battle-scarred South, seeing firsthand the ravages of war and even glimpsing the Ku Klux Klan in its infancy.

There are many wonderful Internet sites about the war; here are a couple of my favorites: The Valley of the Shadow. This rich site depicts the war's impact on two small communities, one north, one south, through diaries, letters and public records.

One site was particularly helpful to me—The Civil War on Son of the South.net. This is a treasure trove of actual Harper's Weekly newspapers during the war. Included are many articles mentioning Lavinia Warren Stratton and General Charles Stratton! 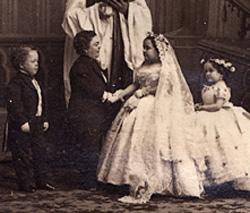 1863
Vinnie and Charles Stratton marry in the most celebrated wedding ceremony of the age; Lincoln issues the Emancipation Proclamation. The General Tom Thumb Company, on its way to perform in Canada, is on one of the last trains to leave New York before the Draft Riots destroyed the train tracks into the city.

1869
Vinnie and the Tom Thumb Company travel the new Transcontinental Railroad months after the Golden Spike, signaling its completion, is driven; Gen. Philip Sheridan reportedly says, "The only good Indian is a dead Indian."

Perhaps no single event was responsible for both settling and destroying the West than the completion of the Transcontinental Railroad at Promontory Point, Utah on May 10th, 1869. Suddenly you could cross the entire continent by railroad; the route from Omaha, Nebraska to Sacramento, California only took four days, four hours and forty minutes; a journey that only years before had taken wagon trains months to travel. New towns sprang up along the route; lawlessness moved west with the population, and the Indian wars truly began. Vinnie and the General Tom Thumb Company were one of the first passengers, commencing their round-the-world tour in July of 1869 by traveling west on the new railroad.

1872
Vinnie and company return home from their around-the-world tour; Lewis Carroll publishes THROUGH THE LOOKING GLASS AND WHAT ALICE FOUND THERE. 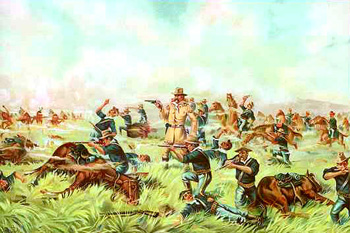 Everyone knows of the Battle of Little Big Horn, one of the great disasters in US Army history, precipitated by General George Armstrong Custer—who first came to notice during the Civil War. The Indian Wars were a tragic part of our country's history, beginning in 1612 with the Powatan Confederacy, a 12-year conflict in Virginia that left many colonists and Indians dead, and ending in 1890 with the Massacre at Wounded Knee, when the last fighting band of the Lakota were destroyed by the U.S. Army. In Vinnie's time the saying "the only good Indian is a dead Indian" was accepted as a matter of fact; she wrote about her few encounters with the Native Americans, on her western trip, with undisguised distaste. Unfortunately, the damaging stereotype of the brave US settler/soldier, and the evil, often drunk, Indian persisted well into the 20th century, in movies and television. Now, however, we have a better understanding of our nation's ugly treatment of the original inhabitants of North America.

This site is a thoughtful examination of Custer, welcoming all viewpoints as Custer remains a controversial figure even to this day, as well as the immediate events leading up to the battle.

Thomas Alva Edison, born in 1847, thus making him a contemporary of Vinnie's, was of course the greatest inventor of his time. From the phonograph to the light bulb, even to his ideas for a talking book—predating the audio book by generations!—he single-handedly changed America during Vinnie's lifetime. This website is devoted to his life and his inventions. 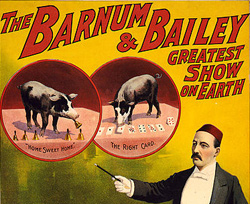 1906
Vinnie publishes a few articles, intended to foreshadow her Autobiography (which is never published in her lifetime), in the New York Tribune; the San Francisco earthquake occurs.

1915
Vinnie appears in her only motion picture.