Mistress of the Ritz 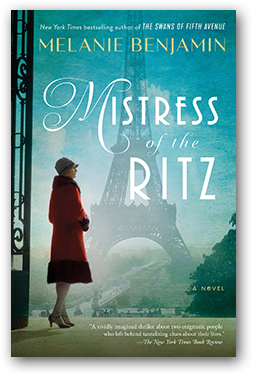 "As Benjamin has proved before, she has a way of animating long-forgotten history. Inspired by the story of the actual Blanche and Claude Auzello, Mistress of the Ritz is a vividly imagined thriller about two enigmatic people who left behind tantalizing clues about their lives."
—The New York Times Book Review

Nothing bad can happen at the Ritz; inside its gilded walls every woman looks beautiful, every man appears witty. Favored guests like Ernest Hemingway, F. Scott Fitzgerald, Coco Chanel, and the Duke and Duchess of Windsor walk through its famous doors, where they’re welcomed and pampered by Blanche Auzello and her husband, Claude, the director. The Auzellos are the mistress and master of the Ritz, allowing the glamor and glitz to take their mind off their troubled marriage, and off the secrets that they keep from their guests—and each other.

Until June 1940, when the German army sweeps into Paris, setting up headquarters at the Ritz. Suddenly, with the likes of Hermann Goëring moving into suites once occupied by royalty, Blanche and Claude must navigate a terrifying new reality. One that entails even more secrets. One that may destroy the tempestuous marriage between this beautiful, reckless American and her very proper Frenchman. For the falsehoods they tell to survive, and to strike a blow against their Nazi “guests,” spin a web of deceit that ensnares everything and everyone they cherish.

But one secret is shared between Blanche and Claude alone—the secret that, in the end, threatens to imperil both of their lives, and to bring down the legendary Ritz itself.

Based on true events, Mistress of the Ritz is a taut tale of suspense wrapped up in a love story for the ages, the inspiring story of a woman and a man who discover the best in each other amid the turbulence of war.

Visit the world of Mistress of the Ritz 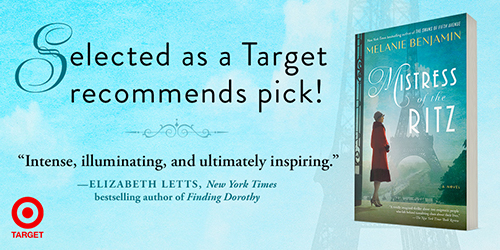 Let’s Escape to Paris Together!

"In Mistress of the Ritz, Melanie Benjamin gives us another strong female character, only in this case she’s trying to do more than just survive: Blanche Ross, a young American actress who arrives in Paris in the 1920s and marries Claude Auzello, who becomes the manager of the Hotel Ritz. Ah, the Ritz. The focal point of Parisian excitement and glamour with its celebrity guests: Coco Chanel, F. Scott Fitzgerald, Ernest Hemingway. Monsieur and Madame Auzello take pride in the Ritz, and their role in making the visitors feel “safe” and able to “breathe a little more freely.” Until June 1940, that is, when the “top-hatted doorman in a black overcoat” is replaced by Nazi soldiers. From there, mystery, intrigue and suspicion descend on the hallways and behind the hotel’s closed doors...
As Benjamin has proved before, she has a way of animating long-forgotten history. Inspired by the story of the actual Blanche and Claude Auzello, Mistress of the Ritz is a vividly imagined thriller about two enigmatic people who left behind tantalizing clues about their lives."
—The New York Times Book Review (Read full review here)

"This impeccably researched, lyrically told historical about a brash American woman and her French husband during WWII is a remarkable achievement.... Benjamin (The Aviator’s Wife) skillfully weaves in a host of historical figures—including Coco Chanel, alleged to be a Nazi sympathizer, and Ernest Hemingway—whose vibrant presences make Benjamin’s protagonists and engaging group of supporting characters shine all the more. Even readers who aren’t big fans of historical fiction might be swayed by this outstanding tale."
—Publishers Weekly, Starred Review (Read full review here)

"Benjamin, who has made a career out of fashioning compulsively readable historical fiction starring real-life women..., does it again here.... The novel improbably but effectively combines a delectable, upstairs-downstairs look at the operation of a luxury hotel; a many-textured and deeply romantic love story; and a compelling drama of the French Resistance.... Readers of Kristin Hannah's The Nightingale are the natural audience for this book club-ready historical novel."
—Booklist

"A compelling portrait of a marriage and a nation at war from within. At the glittering height of the twenties and thirties, suave French manager Claude Auzello has turned the Ritz hotel into the jewel of Paris, installing his brash American wife Blanche as queen among the movie stars, fashion icons, and crowned heads that make up the hotel guests. But the Auzello marriage is rocked by infidelity and turmoil even as the Nazi shadow rises in Germany, and when the Ritz becomes Third Reich headquarters in occupied Paris, France's ultimate power couple must decide if they can weather the storm together or crumble under the oppression and brutality of war. High fashion, royal gossip, political scheming, and French Resistance sabotage all swirl together to make Mistress of the Ritz a cocktail as irresistible as anything served at the Ritz bar!"
—Kate Quinn, New York Times bestselling author of The Alice Network

"No one writes of the complexities of women’s lives and loves like Melanie Benjamin. In Mistress of the Ritz, Benjamin brings wartime Paris brilliantly to life and brings home the terrible dilemmas and moral conundrums forced upon occupied citizens during the war. Blanche Auzello is a martini-soaked flapper with a heart of steel. Benjamin’s fascinating story brings this forgotten heroine vividly to life without flinching from the high price paid by those who fought back against the Nazi scourge. Intense, illuminating, and ultimately inspiring!"
—Elizabeth Letts, New York Times bestselling author of Finding Dorothy

"In Mistress of the Ritz, Melanie Benjamin illuminates the little-known story of Blanche Auzello, the fiery American who, along with her French husband, secretly worked for the French resistance while hosting senior German officials at their storied hotel. This meticulously researched and richly told story could only have been penned by Melanie Benjamin—already an icon of historical fiction, she has truly outdone herself. Important and inspiring!"
—Pam Jenoff, New York Times bestselling author of The Lost Girls of Paris